It’s Valentine’s Day! I wasn’t going to write anything for the occasion, as I find it hard to write romance stories; I prefer a good, solid love story. However, this story came to me two days ago only I didn’t have the time or the energy to write it. Honestly, I’d given up on getting it done until something clicked and Poof! I got it out. The inspiration? A few weeks ago, I told my friend, Adrianna Joleigh, that I wanted to write something inspired by one of her paintings. I love trees and nature visuals so I chose this one (which, BTW, she is giving away! Contact her at the link above if you are interested): 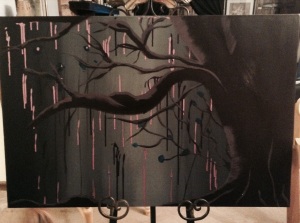 Only, I didn’t have a story to go with it. Then, two days ago, on my way to work a story hit me. Only, the story turned out vastly different to what I had originally planned, which is fine since I like this much better. So, I’m happy to present my quickie Valentine’s Day story, Sunshine and Lemonade. I include the next picture with it because, though it’s a little different that the story, it sums it up quite well. And the couple is just so darned adorable.  🙂 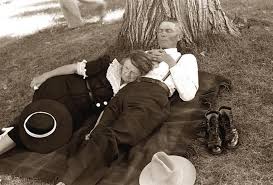 Arlo watched the children as they spilled out of the cornfield. Their hurried steps were light as spectres’ upon the grass, and, in unison, they hummed children’s songs as they skipped across the lawn towards the oak tree. Bathed in the canopy’s shadow at the base of the tree, the lively spirits sang as they circled the massive trunk. From the porch, Arlo watched them through a thick cloud of pipe smoke, enjoying the magical sights and sounds as much as he loathed them. Until the sun burst through the clouds and dashed the vision to pieces.

Isn’t that how things go in this life? he thought as he reached over to squeeze his wife’s wrinkled hand. Here today and gone tomorrow? He’d always believed that cherishing the people and things he loved, and keeping them close, was the most important thing a man could do. The vision confirmed it.

May glanced up from her magazine, Knitting Today, and smiled at him. Her face was as lined as her hands, but every crease and fold had been carved over the years from being a farmer’s wife as well as a mother of ten. In them, Arlo saw devotion and heart. Love. He lanced over at the old oak tree. Like it, May had stayed rooted by his side, bending and swaying under the press of life’s storms as they came, steadily, one after the other. He squeezed her hand again.

‘What are you thinking about so hard?’ she asked. ‘You know it’ll only hurt your head.’

He smiled at the old, old joke. ‘At least I still have enough sense left in there to think with. How many eighty-five-year-olds do you know who can say that?’

May laughed and went back to her magazine. Then, seeming to notice the growing heat as the day wore on, she made as if to get up. ‘You want some lemonade? I know you like it on a hot day.’

‘Yes, but I’ll get it. You…you just stay here in the sunlight. It always made your hair luminous, like…well, like the sun itself.’

May shook a fistful of hair at him. ‘You mean this straggly, grey stuff? You must need glasses.’

‘Thicker ones, then. I’m old and dried up, just like the bag of prunes in the cupboard.’

‘Nah,’ he answered from the screen door. You’re as beautiful today as you were when we met.’

She batted her eyes at him. Even after nearly seventy years, those blue eyes still made his heart flutter. ‘And what about these wrinkles?’

Swallowing back the lump rising in his throat, Arlo slowly swept his eyes back over to the tree. ‘They just make you more beautiful.’

A commotion sounded from the house, and startled, Arlo stepped back from the door to let out a stream of spectre-children. Laughing and singing, they pushed past him to traipse along the worn porch slats. Arlo’s gaze followed them as they danced across the grass towards the oak. Its boughs swayed lightly in the wind, in time with their song.

You are my sunshine, My only sunshine–

‘How about that lemonade, hon?’

Sweating, Arlo nodded, wiped his brow and ducked into the house. Inside the kitchen, he pressed his hands together to make them stop shaking, then shook them to get the blood going. Trapped heat made the room almost stifling hot–the windows were still closed, but he refused to open them. Even so, he could still hear the children’s voices loud and clear.

You make me happy when skies are grey–

From the porch, May’s rocking chair creaked in a steady rhythm, like a heartbeat.

What had he come inside for again? Arlo glanced around the kitchen for help. He ignored the piles of dirty dishes and the clotted milk gone sour and still sitting on the counter. Last night’s TV dinner remained half-eaten on the kitchen table, beside a half-empty bottle of whiskey and an empty glass.

‘Lemonade!’ he almost shouted, as he came back to himself. He crossed the black and white tiled floor in two quick steps, picking his way around the dust bunnies and pieces of garbage which always fell to the floor from the over-stuffed wastebasket, and opened the fridge.

The light was burned. A wave of reek from the darkness inside hit him full force in the face.

How could he have forgotten? There were no more lemons.

She waved a hand at him and smiled, causing every one of her creases and wrinkles to smile as well. ‘Silly man. I’m fine. What do I need lemonade for, anyway?’

Pressure built in his chest. Around the tree, the ghost-children still sang. Their voices piped through the air, accompanying Arlo as he went to his wife and knelt beside her chair.

‘You are my sunshine, my only sunshine. You make me happy when skies are grey. You never know, dear, how much I love you—‘ He couldn’t finish the song.

May took his hand in hers and gently squeezed. The children’s voices rose above the rush of the wind and the rustling of the leaves. And releasing his hand, she opened her mouth to do what he could not.

9 Responses to “Sunshine and Lemonade: A Valentine’s Day Short Story”